By Ryan ChambersMarch 4, 2019 No Comments

Congratulations to the Grace Prep Boys Basketball team for winning the TAPPS 4A state championship! The squad, which went undefeated in District 3 play, finished the season with an impressive 35-2 record which included a pair of victories over TAPPS 5A state champion Frisco Legacy Christian.

The excitement started Thursday evening with the Lions’ semifinal game versus Lubbock Trinity Christian. Grace Prep started slow, but once the Lions got things going, there was no stopping them. GPA defeated Trinity Christian, 79-57, to put themselves in Friday’s championship game.

Friday’s title bout was a rematch of 2018 as The Woodlands Christian won the other side of the 4A bracket. While Grace Prep led in the first half, The Woodlands Christian came out on fire in the second. Down three with less than seven seconds remaining in the game, GPA junior Brandon Lawrence knocked down a trey that tied the contest and sent an already exciting night into overtime. Neither team dominated the extra four minutes until senior Lundyn Ellison made a free throw to put the Lions up four with 2.4 seconds remaining. Grace Prep won 58-54, and claimed its fourth boys basketball state title in school history (also in 2002, 2011, 2012).

Seniors Lundyn Ellison, Evan McCarthy, and Myles McCrary, as well as junior Brandon Lawrence were named to the all-tournament team. 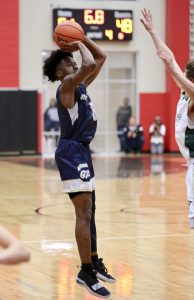 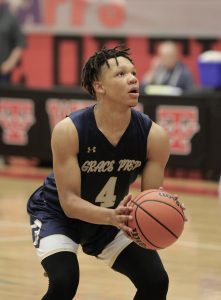 Lundyn Ellison seals the state championship game for the Lions. 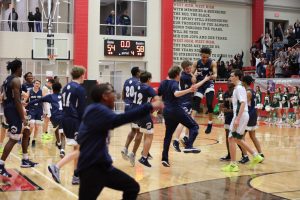